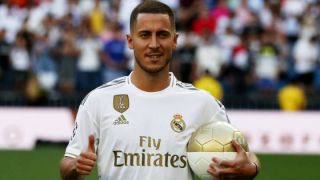 Eden Hazard was unveiled to the Real Madrid fans on Thursday and he has welcomed the prospect of Man Utd star Paul Pogba joining him at the Bernabeu.

The Belgian star arrives as part of an exciting rebuild at Madrid this summer, with Zinedine Zidane seeing deals already done for Hazard, Luka Jovic, Eder Militao and Ferland Mendy.

SEE MORE: Video: Real Madrid stadium almost full as fans flock to see Eden Hazard, but some are chanting for another big transfer

More activity is expected between now and the start of the new season, and Hazard has left the door wide open to the likes of Pogba and Kylian Mbappe joining him in the Spanish capital when asked about other possible signings this summer.

“I want to play with the best, and those you mention are the best,” he is quoted as saying by the Sun.

“But it’s not for me to say about transfers.”

It’s added in the report that Pogba will likely cost a further £150m for Real Madrid to prise him away from Old Trafford, and so it remains to be seen if they have the required budget to seal that move too with player sales expected at some stage.

After such a dismal and bitterly disappointing campaign last time round though which saw them finish 19 points adrift of La Liga champions Barcelona and without a trophy, Real Madrid will surely be excited to see what their new additions will offer moving forward with room for more to follow them.