Leicester City have been handed a huge boost as Ricardo Peirera has allayed any fears over his future by insisting that he can’t wait to return next season.

In turn, the last thing that Brendan Rodgers would want this summer is to see him move on, but as per his comments below, he has no intention of going anywhere.

“I can’t wait to pull the Leicester shirt on again and be back at the King Power Stadium in front of our amazing supporters,” he is quoted as saying by Read Leicester.

That report even suggests the likes of Barcelona and PSG have been paired with an interest and so it will come as a major boost for Leicester that he intends on staying.

The Foxes impressed after Brendan Rodgers arrived in the second half of last season, and he’ll be hoping to build on that next year by not only keeping his current squad intact but also adding reinforcements in order to continue to stamp his mark on the group.

Periera will form an important part of that bid to keep improving and progressing, and so it’s great news for Leicester fans. 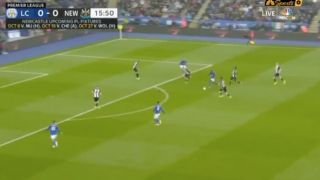