Spanish giants Real Madrid are reportedly close to selling one of their most talented youngsters to their cross-town rivals Atletico Madrid. The ace has Real in his blood.

Real Madrid are edging closer to the sale of midfielder Marcos Llorente to rivals Atletico Madrid, it’s understood that Diego Simeone’s side are set to pay €40m for the 24-year-old.

This is according to Antonio Ruiz, a journalist for Spanish outlet COPE:

Llorente will no doubt find it difficult to say goodbye to his boyhood club, after all Real Madrid are literally in the midfielder’s blood.

Llorente’s father – Paco – represented Madrid over 100 times during a 7-year spell with the club. Llorente is also the great-nephew of one of Spain’s greatest players of all time – Francisco Gento.

Gento is regarded as one of the best players in the world of his generation. The winger won a record six European Cups with Los Blancos during a decade of dominance from the mid 50s to the mid 60s. 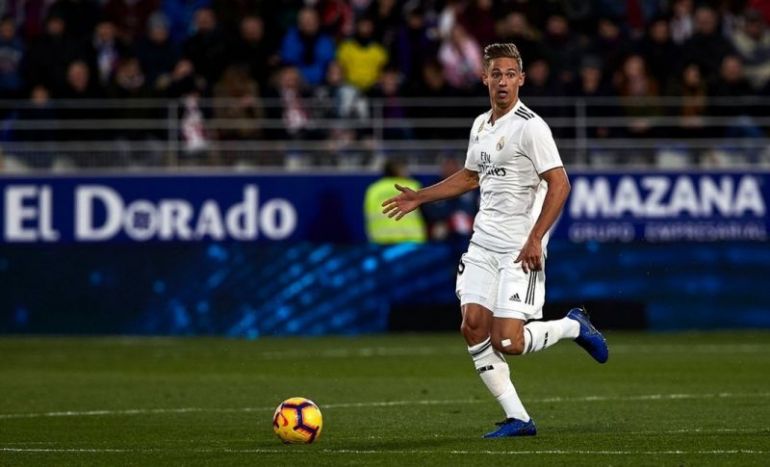 Marcos Llorente made 15 appearances for Los Blancos across all competitions last season. The youngster looked impressive whenever he was called upon.

Whilst some of the Real faithful would have liked to see a player with such deep ties with the club remaining at the Bernabeu, the chance to make €40m from the ace’s sale is simply too good of an offer for Los Blancos to ignore.

Spanish outlet Sport understand that Llorente’s signing could have massive implications in this summer’s transfer window, it’s understood that Atleti are hoping to sign the Madrid ace as a replacement for highly-rated midfielder Rodri. Sport believe Manchester City will trigger the ace’s €70m release clause this summer.

Real Madrid have already splashed the cash this summer and Llorente’s sale will provide Zinedine Zidane with more funds to complete his rebuild of the Bernabeu outfit, after a disappointing season Zidane will be hoping to establish Los Blancos as a serious force in Europe once again.