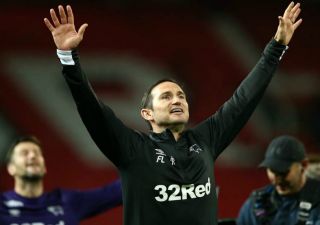 Chelsea will reportedly have to pay a £4m compensation fee in order to prise Frank Lampard away from Derby County to appoint him as their new manager.

As per BBC Sport, Maurizio Sarri has reportedly agreed a deal to become Juventus boss, replacing Massimiliano Allegri in Turin after he announced last month his decision to step down at the end of the season.

SEE MORE: ‘What’s wrong with us’ – These Chelsea fans brand club’s decision to hand star a new contract a ‘joke’

With the Italian tactician set to move on just a year after arriving at Stamford Bridge, that leaves a void to be filled and Sky Sports note that Chelsea are expected to make a formal approach for Lampard to be his successor.

However, it will cost them, as it’s noted that Derby have a clause in their contract with the Blues legend which stipulates that should a club in the Champions League want him, they will have to pay £4m to buy him out of his deal at Pride Park.

If the 40-year-old is indeed Chelsea’s first choice, that shouldn’t be a problem for them, as they look to bring in a popular figure with the fans ahead of what could be a testing campaign next year given their transfer ban this summer as well as losing Eden Hazard to Real Madrid.

That feel-good factor at Stamford Bridge may well be crucial in continuing to battle for their objectives, and it could continue with The Sun noting that Didier Drogba could return to form part of Lampard’s backroom staff.

It’s added that John Terry isn’t expected to return, although Jody Morris and Shay Given could land important roles too as the report would suggest that Lampard’s thinking and planning is relatively advanced at what is still an early stage of the potential managerial merry-go-round.

Nevertheless, he’ll want to hit the ground running too and have as much time as possible to prepare over the summer if he does get the job as expected, and so time will tell if the pieces fall into place for the Chelsea legend to make his comeback as boss ahead of next season.