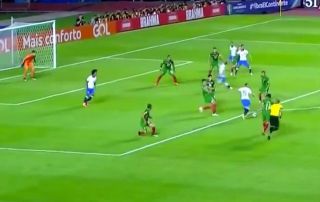 With the pressure on in their Copa America opener on Friday night, Brazil didn’t disappoint as they picked up a 3-0 win over Bolivia.

Although the hosts perhaps weren’t at their best and were a little too cautious, coach Tite will be delighted that they secured all three points to get their tournament underway on a positive note.

Philippe Coutinho scored twice to put them in a comfortable position, but Everton Soares produced the moment of the game with a stunning third for the Selecao.

As seen in the video below, the 23-year-old cut in from the left flank onto his favoured right foot and lashed home a superb strike in the latter stages of the encounter.

As noted by Goal.com, the Gremio forward has attracted plenty of interest already, with Man Utd, Man City and AC Milan all linked with a move, with the Italian giants said to have been ready to submit a €40m offer.

Time will tell if they go through with that to try and take pole position in the race to sign Everton, with ESPN Brasil noting in January that Man City had made a £55m bid for him, while also noting that United were also keen at the start of the year too.

In turn, it remains to be seen who steps up their reported interest, as with goals like this one and a bigger role for Brazil this summer, Everton will only become more attractive to potential suitors while that price-tag may well be increasing by the minute.