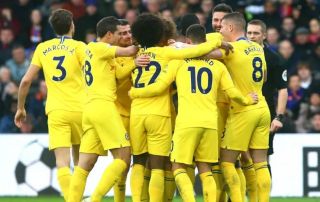 Some Chelsea fans were surprised to see reports that the club had rejected bids for winger Willian, the star has been subject to criticism in recent seasons.

Some fans might be surprised to see that the two Spanish clubs have made offers to sign the former Shaktar Donetsk star, given that The Sun reported that the ace was close to being handed a two-year contract extension by the Blues.

Sky Sports reporter Kaveh Solhekol revealed that the La Liga giants made bids for the Chelsea star this afternoon:

Barcelona and Atletico Madrid willing to pay £35m for Willian. Chelsea not interested

Chelsea could be forced to keep hold of the star this summer as they’re facing a two-window transfer ban, whilst the time may be approaching for the star – who will turn 31 this summer – to be replaced by a youngster, the Blues would be taking a massive risk by placing added responsibility on the likes of Christian Pulisic and Callum Hudson-Odoi.

Youngsters will need to draw on the experience of the likes of Willian in order to hit the ground running and become first-team regulars for the Blues.

Willian made 53 appearances for the Blues across all competitions last season.

Check out some reaction from Chelsea fans to the news, it seems that some fans would be desperate to sell the star:

So you're telling me we had another chance of offloading almost 31 year old Willian for £35m but we're "not interested". We'd rather give him a new contract and the number 10 jersey.

We deserve everything coming looooooool

Our board is mad

Why? That’s good money for him at this stage of his career

Sell him with immediate effect!

Willian could be a crucial player for the Blues next season, the star could be Frank Lampard’s go-to man next season for the Stamford Bridge outfit, during Lampard’s final years at Chelsea, Willian was arguably at the best that he’s ever been for the west London club.

Lampard’s appointment as Chelsea’s new boss seems imminent, according to The Sun, Chelsea’s hierarchy are hoping to seal the appointment of the club legend Frank Lampard by the end of the week.