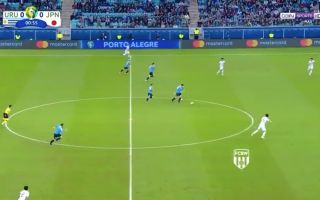 Luis Suarez almost scored one of the goals of the year for Uruguay last night, as his side drew 2-2 with Japan in the Copa America.

Suarez is known for being a very spontaneous footballer, thus it wasn’t much of a surprise to see him attempt a shot like this.

As seen above, Suarez tried his luck with a volley from the halfway line last night, an attempt that only missed the goal by a matter of inches.

Suarez scored a fair few of these during his time with Liverpool, however had this one gone in, it’d surely have gone down as the best goal of his career.