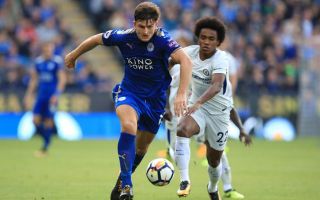 Leicester City defender Harry Maguire has tweeted about liking a social media post linking him with a transfer to Manchester United this summer.

The England international has been strongly linked with a big move in this transfer window after his terrific form with the Foxes, with one of the more recent stories from the Daily Mirror suggesting he was set to pick Manchester City over Man Utd in a £65million deal.

However, Maguire certainly caused a bit of a stir when he appeared to give his approval to links with United on Instagram.

The 26-year-old has since tweeted to explain himself, though, insisting he’d only clicked the ‘like’ button by mistake…

Who knows if Maguire is being honest or just trying to cover his back? Still, City fans will be hoping it’s a sign he doesn’t actually want the move to Old Trafford and could still be Etihad Stadium-bound instead.

The former Hull City centre-back could be ideal for Pep Guardiola’s side as a long-term replacement for Vincent Kompany, who left the club this summer.