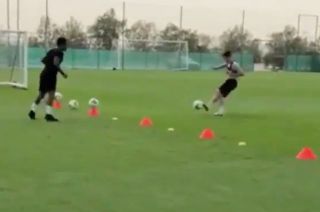 Daniel James has seemingly wasted little time in impressing Man Utd fans as they were delighted to see him already hard at work this summer preparing for the new season.

As noted by BBC Sport, the Red Devils completed a £15m swoop for the 21-year-old earlier this month, as he embarks on an exciting new chapter in his career this coming season.

Evidently keen to hit the ground running and make a positive first impression on Ole Gunnar Solskjaer and the rest of the squad when they meet up for pre-season training, the youngster has posted a video of himself already working hard to get himself fit in a training camp in Dubai.

As seen in the reaction below, it has gone down very well with the United faithful, as they will undoubtedly welcome hard work and commitment from him to help them get back on track and fighting for major honours.

While James has a long way to go in his career as he will need experience and maturity to flourish and develop into a top class player, these are promising early signs for the talented starlet as it shows that he’s willing to put in the hard work to prove his worth and get a chance to impress.

It appears as though it’s catching on across the Man Utd squad though, as The Sun report that after facing intense scrutiny last week, Jesse Lingard is also working on his fitness while on holiday as the Red Devils will be desperate for a fast start to next season after such a disappointing campaign last time round.

Preparations underway for the start of the new season! ??? @K3Performance pic.twitter.com/bKV8BHslt5

Look forward to seeing you play.

good lad.
Welcome to our Theatre of Dreams.
You’ll find that United fans love the young players who play with daring,passion and hard work.
Be a legend,grab it.

Well done Daniel , keep working hard lad so you can hit the ground running on the front foot ,we can’t wait to see you playing for United ?

Cant wait to see you fly through the wings next season.

Keep up the hard work! Looking forward to seeing you play!

Welcome to Man Utd!
Keep Jesse & Ashley out of the team pls.