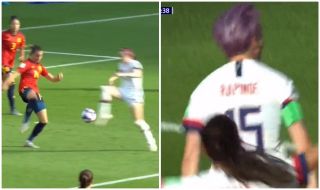 USA have gone 2-1 up against Spain in tonight’s Women’s World Cup match thanks to a very generous penalty awarded after a look at VAR.

Watch the incident below, as a nothing challenge ends up being awarded as a foul after a lengthy look at the video technology.

Much of this tournament has been marred by the interruptions from VAR and some highly questionable calls.

This kind of drama is what we have to look forward to in the Premier League next season!