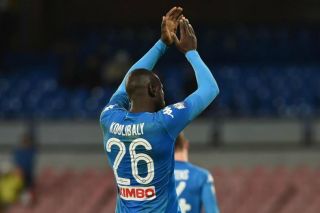 Speculation has been rife over rumoured Man Utd and Liverpool transfer target Kalidou Koulibaly, and the Napoli defender has seemingly left the door open for an exit.

The 28-year-old has firmly established himself as one of the top centre-halves in Europe, pairing defensive solidity with the quality to play out from the back.

Unfortunately for both the Senegalese international and Napoli, that hasn’t led to success in the form of trophies, and so rumours have continued to surface over his future with the Serie A giants.

As per the Express, Liverpool and Man Utd have been both linked with the towering defender, although it’s noted in that report that Napoli are demanding €120m to green light an exit this summer.

Koulibaly is undoubtedly needed more so at Old Trafford given Ole Gunnar Solskjaer side’s dire defensive record last season which saw them concede 54 goals in 38 Premier League games, giving them the worst defence out of the top nine sides in the standings.

However, pairing him with Virgil van Dijk could be a masterstroke from Liverpool, as coupled with Alisson behind them, it’s difficult to see how most sides would be able to find a way through such a solid foundation.

The player himself has been discussing his future, and while he was keen to avoid being distracted from his international commitments this summer, he hasn’t entirely closed the door on an exit from Napoli, leaving it open to interpretation as to whether or not he will remain with them next season.

“Everyone talks about me, but I’m only thinking about Senegal, because this is my goal now and I want to achieve something big with my national team. If I stay in Naples? I don’t know, I think so,” he is quoted as saying by Goal.com.

Man City are also specifically mentioned in that report as being an interested party, but with the Metro noting that the reigning Premier League champions are on the verge of signing Harry Maguire, they will surely drop their interest in Koulibaly.