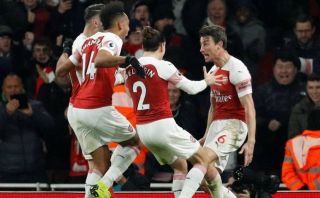 Arsenal defender Laurent Koscielny is reportedly in talks over leaving the club earlier than expected after failing to agree a new contract at the Emirates Stadium.

The Frenchman has been a fine servant to the Gunners for nine years now, having joined from Lorient as a relative unknown before going on to become one of the finest centre-backs in Europe.

Arsenal fans would probably be pretty gutted to see Koscielny go, even if he is getting on a bit and has had some recent struggles with injuries.

Still, it seems the 33-year-old could be closing in on a move away after failing to agree a new contract, with Lyon and Rennes interested in snapping him up, according to the Telegraph.

Koscielny’s Arsenal contract is due to expire at the end of next season, so it might be wise for the north London giants to cash in on an ageing player while they still can.

AFC have been linked strongly with Saint-Etienne wonderkid William Saliba in defence, and he could be an ideal long-term replacement for Koscielny if they get him.