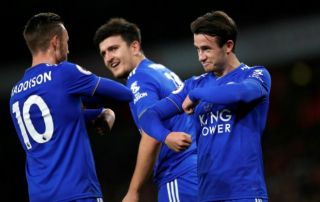 The England international has been linked with both clubs for some time this summer, and it does not appear that we’re heading much nearer a conclusion to the saga.

The latest from Sky Sports is that both Manchester clubs have been in talks with Leicester over a possible deal for the last few weeks, and are both prepared to pay £65million to sign Maguire.

However, that does not look likely to be enough for the Foxes, who look set to demand more than £75m for the 26-year-old, according to the report.

Leicester are clearly not under pressure to sell, and Sky Sports claim Maguire himself is not pushing to be allowed to leave the King Power Stadium, despite being keen on representing a big six club.

It will be interesting to see if either club up their offer for the former Hull City man, with Sky noting that City are under pressure to bring in a player who counts as homegrown.