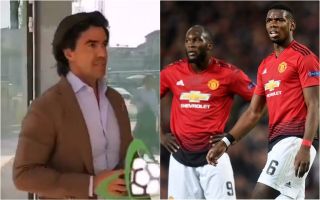 Manchester United fans have flagged up the video below of Romelu Lukaku’s agent arriving at Inter Milan’s offices to try to get a transfer done for Romelu Lukaku.

There have been long-running rumours linking Lukaku with Inter this summer, with one of the recent reports from the Express even stating a swap deal involving Mauro Icardi could be possible.

Video: Federico Pastorello (Lukaku's agent) arriving at Inter Milan's offices. His aim is to find an agreement between #mufc and Inter for Romelu Lukaku #mulive [@GiokerMusso, info via tmw] pic.twitter.com/0Lg6P08sRQ

See above as Federico Pastorello arrives to discuss a move for the Belgium international to join the Italian giants in what would be an exciting move for them.

It’s a tad worrying for Man Utd, however, with the club taking time to get any signings in this summer, meaning bringing in a replacement for Lukaku is by no means a foregone conclusion.