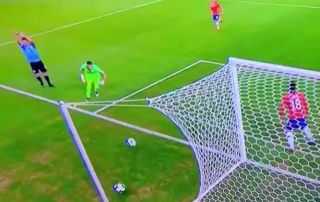 Luis Suarez was left red-faced on Monday night as the Uruguay striker decided to appeal for a penalty after the goalkeeper handled the ball…inside the box.

As seen in the video below, the Barcelona talisman was denied by a good save in his side’s win over Chile in the Copa America, as Edinson Cavani’s late goal was enough to seal all three points and top spot in Group C.

However, it came after this comical moment from Suarez, as he appeared to lose his bearings it seems as after seeing his effort blocked by a hand, he must of thought it was a defender as he immediately appealed before turning away with his own hands on his head after realising his mistake.

Never shy to make his feelings known to the officials or to appeal for a decision in his favour, this is probably taking it to new levels even for the Barcelona star.

The 32-year-old wasn’t done there either as seen in the second video below, as he appeared to appeal for a Chile player to receive a booking after he helped take down a pitch invader.

It’s literally the most Suarez like thing to do ever, and while some will undoubtedly be enraged by it, others will see the funny side of it as it is quite amusing.

Luis Suarez claiming the goalie handled the ball inside his own box ??? pic.twitter.com/RPQ9tPhBG5

This happened last night during Uruguay vs Chile. Luis Suarez ran to the referee to tell him to book the opponent for kicking a pitch invader running on the field. This guy is absolutely mad, out of his head ?? pic.twitter.com/9fEAGMzxsi