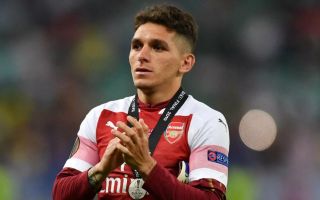 Arsenal midfielder Lucas Torreira has broken his silence on speculation linking him with a potential summer transfer to AC Milan.

The Uruguay international only joined the Gunners last summer, having signed after an impressive stint in Serie A with Sampdoria.

Torreira has been linked with a return to Italy by a variety of sources, with Spazio Milan claiming the Rossoneri were in for him this summer.

And this has previously been fuelled by the fact that Torreira himself stated he wasn’t too happy with life in London and missed Italy, as quoted by Goal.

Still, the latest from the 23-year-old is that he hasn’t been approached by Milan and that he’s only focused on continuing at the Emirates Stadium.

“Nobody from AC Milan has got in touch with me, today I’m in the Premier and happy to be part of the Arsenal ,” he said, as quoted by the Daily Mirror.

“It cost me, the adaptation. It’s not easy, but I only think about the team. I’m happy to be there.”

Of course, Torreira may just be playing it cool for the moment, but many Arsenal fans will be hoping this can be the end of the matter.

The young South American shone in his first season in England and looks a big talent worth keeping around for the long run.