Widely regarded as one of the best players in the world at the moment, the young Frenchman would no doubt be a dream signing for Liverpool.

In fairness, it’s probably not that realistic and most LFC fans will be aware of that, but Sturridge has got some supporters dreaming after posing with him and revealing that they chatted goal celebrations.

Sturridge has already previously announced he’ll be leaving Anfield this summer but technically remains a Liverpool player until his contract expires on Sunday.

Who knows? Perhaps one of his last acts as a member of Jurgen Klopp’s side will be to put in a good word about the club to Mbappe…

Here’s a look at some of the comments on that Instagram post, as well as some tweets… 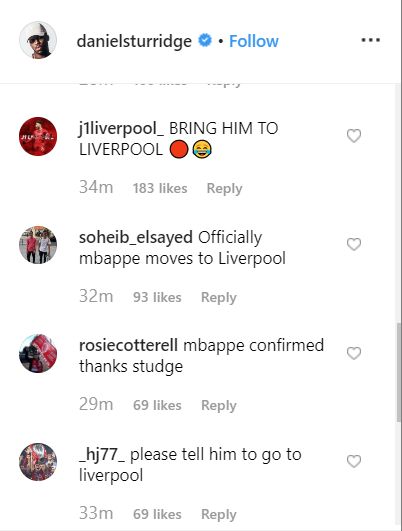 Mbappe used to do the Sturridge celebration. Try tell me he wouldn’t love to play for us.

Mbappe definitely asked Daniel Sturridge if he can sign for Liverpool didn’t he???? #LFC pic.twitter.com/vgS4lIgfbL

Sturridge posted a pic with mbappe, it's 100% happening idec

Sturridge and Mbappe on insta ??