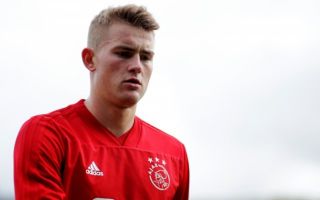 Speculation suggests that Matthijs de Ligt is on the cusp of joining Juventus, and his decision has been slammed by Dutch football expert Hugo Borst.

As noted by Corriere dello Sport, the 19-year-old is said to be closing in on a deal to move to Turin after a hugely impressive spell with Ajax.

The commanding centre-half led the Dutch giants to a domestic double last season as well as the Champions League semi-finals, while he also now plays a pivotal role for the Netherlands as the future certainly looks bright for him.

Aside from his solidity at the back, De Ligt chipped in with seven goals and four assists in 55 appearances last season too, showing that he can also be a major threat in the final third on set pieces.

However, his expected decision to move to Italy and join Juventus hasn’t gone down well with Borst, who blasted the Ajax starlet’s touted switch to the reigning Serie A champions.

“If you can choose anywhere in the world you choose the Premier League, Barca or Real Madrid,” Borst told Sport, as noted by the Express. “England and Spain have the two strongest leagues in the world.

“In those countries, you can see the best players and watch them improve.

“Juve? Ha! That club is guaranteed to win the league and they couldn’t lift the Champions League even with Cristiano [Ronaldo].

“Why would de Ligt want to go to Italy? Raiola appears to be demanding a yearly salary of €14m. In what moment did de Ligt become so money hungry?”

The Express notes that Man Utd, Barcelona and Paris Saint-Germain were all keen on the Dutch international too, but it appears as though they will be snubbed in favour of Juve.

While that is a decision that Borst can’t understand, the opportunity to win major trophies with the Turin giants, to play alongside the likes of Cristiano Ronaldo and to challenge for the Champions League next season seem like big enough reasons to prefer a move to Italy along with the possible financial benefits.