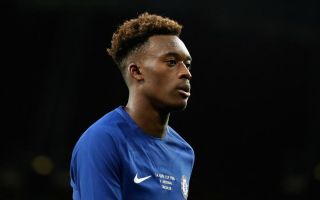 Chelsea have reportedly received yet another transfer bid from Bayern Munich for wonderkid Callum Hudson-Odoi.

According to the Daily Mirror, the Blues have turned down Bayern’s latest offer as the Bavarian giants also look at the likes of Manchester City’s Leroy Sane and Barcelona’s Ousmane Dembele as options in attack.

The Bundesliga champions have just seen two club legends in the form of Arjen Robben and Franck Ribery leave the Allianz Arena in the same summer, so strengthening that attack makes sense as a priority.

Still, it seems Chelsea are not prepared to let Hudson-Odoi go, with the club trying to tie the 18-year-old down to a new contract.

The England international showed himself to be an exciting prospect after breaking into the Chelsea first-team last season before suffering a bad injury.

Chelsea have rejected a bid for Callum Hudson-Odoi

As noted by BBC Sport, Bayern were also in for Hudson-Odoi in January, with the club clearly admirers of his as he’d not yet truly established himself in the senior CFC side by that point.