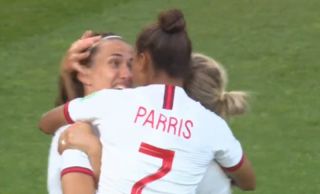 Manchester City midfielder Jill Scott has opened the scoring with a well-taken early goal in tonight’s game for England against Norway in the Women’s World Cup quarter-final.

The 32-year-old latched on to a cross that missed its initial target, and stroked the ball in to the far corner to give the Lionesses a dream start to tonight’s big match.

You can see the goal video above as England will now hope to build on this hugely impressive opening few minutes.

Phil Neville is doing a fine job with this side, who look one of the strongest teams in the tournament so far.