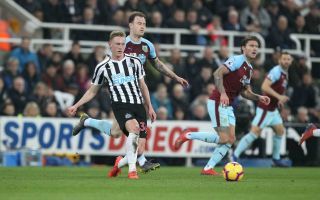 Manchester United are reportedly increasingly confident of signing Newcastle United youngster Sean Longstaff in this transfer window due to the departure of Rafael Benitez as Magpies manager.

The promising 21-year-old has been linked several times with the Red Devils of late, and it looks as though the club are prepared to possibly up their bid to around £30million to bring him in, according to the Metro.

Despite his relative lack of experience at the highest level, Longstaff looks a superb young talent who could be an ideal long-term replacement for Michael Carrick in the middle of the park.

Longstaff plays in a similar way to the Man Utd legend, and could already be a considerable upgrade on players like Nemanja Matic and Fred, who were well below par last season.

Midfielders seem to be a priority for United this summer, as the Metro’s report notes, while they also mention Solskjaer’s preference for bringing in young British talent.

Sean Longstaff is a top transfer target for Manchester United

In that sense, Longstaff could be another ideal addition to follow Daniel James and Aaron Wan-Bissaka, who has appeared in his club’s new colours in leaked pictures this evening.