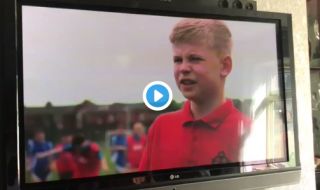 This young Manchester United fan has gone viral after admitting he doesn’t like any of this current crop of players at Old Trafford.

Watch the hilarious video below as this kid talks about football and reveals he’s a Man Utd supporter.

This kid was just interviewed live on ITV News and he was asked about who he idolises at Manchester United… Well, just listen to his reply ? pic.twitter.com/JSdWNjFT2Z

He is not, however, a fan of any of their players, it would seem, as he slams them all as ‘rubbish’.

The kid does at least admit he thinks manager Ole Gunnar Solskjaer is a legend, so that’s something.

Take note, Manchester United – you’ll need to do a lot, lot more to impress this guy.