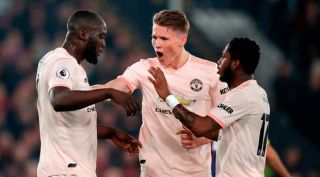 There’s plenty of transfer gossip doing the rounds at the moment regarding Manchester United striker Romelu Lukaku and a move to Inter Milan that seems to be constantly on again and off again.

There has been surprise talk of a two-year loan offer for the Belgium international, and it could be that Man Utd are showing signs of being ready to accept it, according to Gianluca Di Marzio.

At the same time, it’s not looking nailed on that Lukaku will end up leaving the Red Devils in this transfer window, with the Metro claiming Ole Gunnar Solskjaer is planning talks with the player about his situation.

The piece explains in a bit more detail how Solskjaer feels about Lukaku’s presence in the squad, with some concern that, despite him being the club’s best finisher, he doesn’t seem an ideal long-term fit for the way the Norwegian tactician wants to play.

United fans will probably feel Lukaku’s had enough chances to prove himself now, and that the team could do better than the 26-year-old.

That said, an initial loan could limit MUFC in terms of trying to bring in a top class replacement this summer as they’d have to wait to bring in a transfer fee for Lukaku.