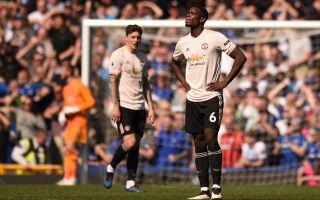 Manchester United midfielder Paul Pogba reportedly told his former Juventus team-mates of his desire to seal a transfer back to the club this summer.

According to the Daily Mirror, citing unnamed sources in Italy, the France international spoke about his transfer plans at the recent birthday party of his old Juve colleague Andrea Barzagli.

It remains to be seen if Pogba will definitely get his wish, but Don Balon just yesterday linked Pogba with the Italian giants in a potential €135million move.

It’s also been claimed that many Man Utd players want the 26-year-old gone due to the unrest he’s caused in the dressing room.

However, that same report from the Sun suggested MUFC executive vice-chairman Ed Woodward would prefer to keep him and could even offer him a new big-money contract.

In short, it looks rather up in the air at the moment, and one imagines there could be plenty of obstacles towards Pogba getting the transfer he wants.

That said, if Pogba wants to go and his United team-mates don’t want him around, one imagines Woodward might be backed into a corner at some point, even if he’s likely to have the final say.