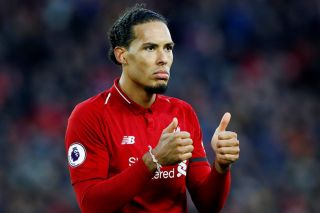 After an exceptional season last year, Liverpool defender Virgil van Dijk is seemingly not letting up over the summer as he continues to stay in shape.

Having played a fundamental role in Liverpool’s Premier League title scrap as well as their Champions League success, the Dutchman was then on international duty with the Netherlands in the UEFA Nations League.

In turn, he will have a shorter break than most already over the summer, but that hasn’t stopped him from working on his fitness with his personal trainer this week, as noted by the Liverpool Echo.

It’s noted that he was using the same facility as the Rangers squad, but more importantly from a Liverpool perspective, fans will surely be delighted to see this kind of work ethic from their defensive leader as he looks to inspire the Merseyside giants to more success next season.

On one hand, he’ll certainly need the rest to regroup and recharge the batteries ahead of another gruelling campaign.

Nevertheless, its individuals like him who ultimately reap the rewards of their hard work off the pitch, as he clearly takes his fitness and health very seriously to put himself in the best position possible to be at 100% when he plays for club or country.

From his commanding defensive displays to his distribution and goal threat in the opposition box, Liverpool will hope for another big season from the Dutch international next year to help them build on their success last time round.

Virgil Van Dijk has been training in Portugal at the Rangers training camp ahead of preseason.

However, just to clarify, he was having his own training session at their ground, and didn’t join in with Rangers’ session. ? pic.twitter.com/2TTZ9MRvMm