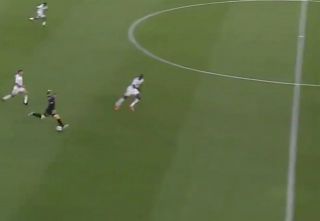 Wayne Rooney continues to score stunning goals in MLS and the former Man Utd striker may well have just bagged his finest one yet.

DC Utd face Orlando City on Wednesday, and it took just 10 minutes for the 33-year-old to find a breakthrough for his side.

However, he did it in some style as seen in the video below, as he picked the ball up in his own half and after spotting goalkeeper Brian Rowe off his line, he produced a pin-point driven effort to loop over his head and into the back of the net.

Naturally, that sparked wild celebrations with Rooney’s teammates on the pitch, and to make it even sweeter it proved to be the winning goal, as it deservedly should have been.

It’s absolute brilliance from Rooney, who continues to enjoy his spell in MLS and also continues to prove that he certainly still has it, and it’s a strike reminiscent of David Beckham’s effort against Wimbledon all those years ago as it could be argued that the connection on this one is even sweeter.

WAYNE ROONEY FROM PAST MIDFIELD!!!! pic.twitter.com/dJ5BriAOx3