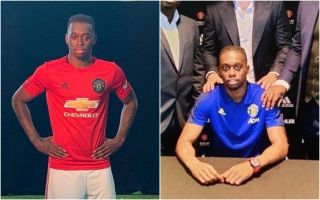 First images of Aaron Wan-Bissaka in a Manchester United kit have been leaked online this evening as the 21-year-old looks set to complete a transfer to Old Trafford.

This follows a report from the Sun yesterday that included pictures of Wan-Bissaka arriving at the Lowry Hotel in Manchester ahead of concluding his £50million move from Crystal Palace.

All that’s missing now is an official announcement from Man Utd, but these pictures surely confirm what we already knew anyway.

Wan-Bissaka shone as a bright prospect in the Premier League last season and looks an ideal long-term replacement for the departing club veteran Antonio Valencia.

Photo: Arsenal forced to make a late line-up alteration as star injured in the warm up vs Villarreal
More Stories Aaron Wan-Bissaka