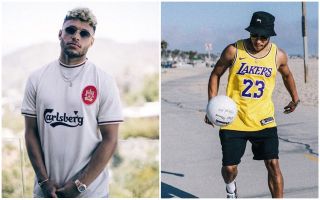 The former Arsenal midfielder, who teared up during a chorus of You’ll Never Walk Alone after May’s 4-0 win over Barcelona, was seen wearing Liverpool’s away shirt from the 1996-97 season in a cool Instagram photo.

Oxlade-Chamberlain, who posed for the photo during his recent holiday in Los Angeles, captained the snap: “1996 X 2019”.

Ox’s shirt wasn’t an exact replica as it didn’t feature the Reebok logo, but Reds fans loved it nonetheless.

But one fan didn’t seem that impressed and quipped: “Money you’re on and you’re walking round in Stan Collymore clobber”.

The photo was taken by Matt Gordon, of mattework.com. Earlier in the week, Matt shared photos of the Ox on Venice Beach wearing an LA Lakers jersey.

the merchant of venice beach?/// ?