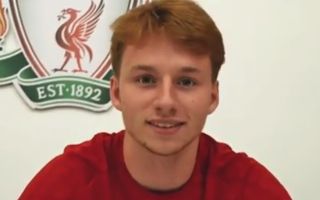 Liverpool won the race to sign Sepp van den Berg this week… but only after Bayern Munich had reportedly made a sneaky late bid to overtake them.

The 17-year-old centre back was pictured posing with a Liverpool shirt on Thursday after completing a move from PEC Zwolle.

He passed a medical on Merseyside and, according to The Times, Bayern were frantically calling his agent while that process was taking place.

Players have famously had medicals at one club only to join another in the past – Willian being a fine example when he moved to Chelsea after undergoing tests at rivals Spurs.

But it is still a bit of a cheeky play from Bayern.

Unfortunately for German champions Bayern, they were not able to prise Van den Berg from Liverpool at the last minute.

The teenage ace cost the Reds an initial transfer fee of £1.3million, per The Times, but that fee could rise to £4.4m depending on how many games he plays.

Speaking to LiverpoolFC.com about his move to Merseyside on Thursday, Van den Berg said: “Can I put it into words? It’s just amazing. It is, for me, the biggest club in the world and it’s a dream come true. I am really excited.”

Talks underway: Liverpool target much-needed centre-back recruit in £2m deal with Reds talent closing in on loan the other way in transfers that suit all parties except Celtic in blow to Hoops’ free transfer plans January 31, 2021 17:29
Liverpool FC

‘He should be the one Liverpool are looking at’ – Carragher advises Klopp to sign £60m Premier League star August 20, 2019 8:55
Liverpool FC