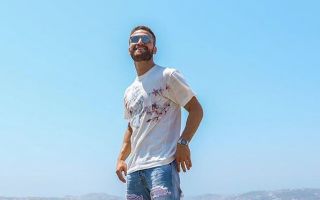 Shkodran Mustafi was pretty awful at times for Arsenal last season but he should still be entitled to enjoy a summer holiday without being abused.

But the German defender was hit with a flood of offensive messages on Instagram this week after posting a picture of himself in the sun.

Standing on a rock near the sea, Mustafi tagged the photo using his favourite “back on top” catchphrase.

Another wrote: “Find a club out there and stay there. You can go for nothing…”

A user called @joeycallaghan had one word and that was “Retire”.

READ MORE: Starlet wants to leave Arsenal after summer holiday with Gunners teammate… and there are offers already on the table

But not all of the comments on the photo were horrible.

One supportive Gunners fan wrote: “Please stay at Arsenal. Just ignore all the hate comments. We know you can do better than last season.”

One read: “Looking for new horizons….can ya see Turkey?”

Another Insta user wrote: “Come to Fenerbahce, we need you! (From an Arsenal fan)”.