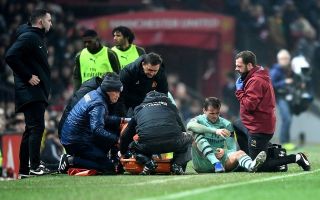 The 23-year-old has been ruled out of action since, and as per The Daily Mail, there are fears that he will miss the start of next season too.

However, it’s important that Arsenal give him as much time as possible to make a full recovery, as the last thing that Holding would want is to return too soon and risk suffering a setback.

Although no blame was ever really attributed to Rashford at the time, the injury was a result of a coming together between the pair, and after hearing that Holding’s setback was serious, the young United forward showed his class by getting in contact.

“Marcus text me when the [extent of the] injury came out,” Holding told Arsenal’s website. “He just dropped me a text and just said, ‘Hi mate, sorry to hear about the injury, I didn’t mean it in any malicious way’.

“I didn’t take it as a personal attack on me, it’s just football. I just replied to him like, ‘Yeah mate, don’t worry about it, it’s football, you didn’t even make a tackle, you just sort of ran into me, there’s nothing in it, I’m not going to be judging you off that’. I’ve got nothing but respect for him and just wished him the best for the season.”

Naturally it’s hoped that Holding can make a full and swift recovery and play a big role for Arsenal next season, while Rashford will certainly have gained plenty of respect from all concerned for his response to what was a bitter blow for the Arsenal defender.