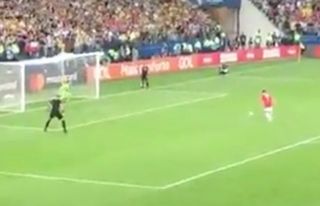 Man Utd ace Alexis Sanchez was the hero for Chile on Friday night as he scored the winning penalty in a shootout against Colombia in the Copa America.

The defending champions were held to a 0-0 draw in normal time, but it was Sanchez who kept his cool and stepped up to slot home his penalty to hand them a 5-4 victory in the shootout as they advance to the semi-finals.

As seen in the video below, it was a brilliant spot-kick under pressure as he sent the goalkeeper the wrong way and made it all look too easy.

Man Utd fans will certainly be hoping that his exploits this summer are doing his confidence and self-belief wonders ahead of next season, following on from a bitterly disappointing campaign last time round.

Sanchez managed just two goals and four assists in 27 appearances last year for the Red Devils, while he already has two goals for Chile in this tournament prior to the win over Colombia.

In turn, he has evidently found some form for his country and showed his character to score the penalty below, and so United supporters will be desperate to see it have a positive effect on Sanchez, as the 30-year-old hasn’t shown anything close to his best in Manchester as of yet and time is surely running out for him to do so.

Alexis Sanchez the hero once again as he scored the last penalty of the shootout to send Chile into the semi-final of the Copa America. He's a completely different player for his country. pic.twitter.com/jeSQCpH0U3