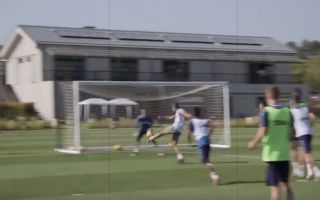 Liverpool and England legend Steven Gerrard showed that he’s still very much got it, as he scored a fantastic goal in training for the Scottish Premier League side.

Gerrard, who was appointed Rangers manager last summer, showed that age is just a number, as he bagged a sumptuous goal for the Scottish side in training recently.

The goal saw a ball over the top find Gerrard, who finished on the volley with his left foot to show the world that form is temporary, and that class truly is permanent.

? Yep, the Gaffer's still got it! pic.twitter.com/VSMiAVa1Cf

Contact made: Man United eye move for La Liga star who has a release clause of only €25m
More Stories Steven Gerrard