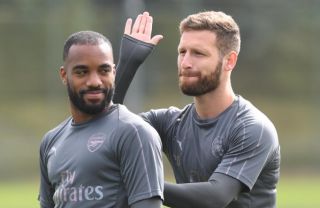 Arsenal defender Shkodran Mustafi has appeared to aim a not-so-subtle swipe back at his haters with this latest picture on Twitter.

See the image below as Mustafi shows himself underwater, with his tweet explaining he’s gone there to work in silence, before posting a shushing emoji.

???The best place to work in silence is underwater ??? #sm20 pic.twitter.com/h5xMKG2pW9

As we reported earlier this week, the Gunners ace was bombarded with offensive messages on social media as he simply posted updates from his holidays.

Mustafi’s form for Arsenal has left much to be desired, but no one deserves to be sent such nasty personal abuse, with many Gooners taking things too far.

No wonder the Germany international is now determined to get some peace and quiet.

It may well be that Mustafi can escape Arsenal altogether very soon, with Turkish outlet Aksam claiming he’s a transfer target for Fenerbahce on an initial loan with a view to a permanent move.