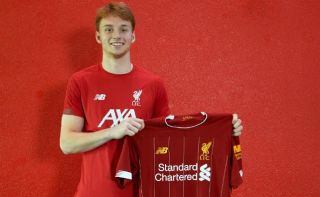 Not many people would have heard of Sepp van den Berg a few weeks ago, but he’s now being talked up as a real talent after his transfer to Liverpool.

The 17-year-old defender was recently announced as the Reds’ first signing of the summer, and it looks like he could be the next big thing at Anfield.

Jurgen Klopp has a decent record of bringing through top young players at Liverpool, with Trent Alexander-Arnold and Joe Gomez the prime examples.

While Van den Berg might not be expected to make it into Klopp’s first-team straight away, it may well not be that long before we see the Dutch starlet make an impact at senior level.

And many LFC fans are already very excited by some video highlights they’ve seen from him on Reddit.

Various supporters seem to have noticed the same thing about his game – his quality on the ball when passing out from the back, whilst also praising his general speed and strength.

This should make him a great fit for the way Liverpool play, so it’s little wonder he’s quickly won over fans of his new club…

“He can pass the ball, he has good vision,” said one user.

“Seems to be clean, calm, collected. I like it,” said another.

“He’s actually rapid. Seems similar to Gomez. Also I can see why he would fit in our system he’s very calm with the ball,” read another comment.

Others praised him as a “colossus” and compared him to Joel Matip, one of the team’s top performers in the second half of last season.

Talks underway: Liverpool target much-needed centre-back recruit in £2m deal with Reds talent closing in on loan the other way in transfers that suit all parties except Celtic in blow to Hoops’ free transfer plans January 31, 2021 17:29
Liverpool FC

‘He should be the one Liverpool are looking at’ – Carragher advises Klopp to sign £60m Premier League star August 20, 2019 8:55
Liverpool FC