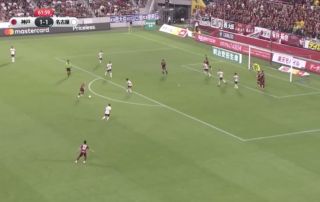 Andres Iniesta showed he very much still has it today, as the Spaniard scored a sublime 25-yard strike for Vissel Kobe.

Iniesta, who made a name for himself during his long stint at Barcelona, showed that age is just a number as he bagged a superb goal for his current side Vissel Kobe.

After the ball was cleared from a cross, it found it’s way to the feet of Iniesta, who composed himself before firing into the top corner.