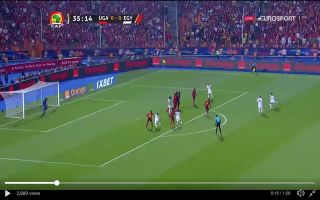 Liverpool superstar Mohamed Salah has fired Egypt into the lead against Uganda by scoring a superb free-kick in tonight’s Africa Cup of Nations clash.

Egypt were awarded a free-kick in the 35th minute of the clash and Salah stepped up confidently to take the set-piece for his country, the Liverpool star curled a lovely free-kick towards the top corner and Uganda’s Denis Onyango managed to get a hand to the ball but couldn’t stop it from hitting the back of the net.

Salah has silenced his critics with his stunning strike tonight, the ace has been kept quiet in some of Egypt’s clashes in this summer’s competition – but he’s shown that he only needs one chance to produce something special tonight.

The Egyptian King sends the home fans wild with a majestic free-kick ?? ? pic.twitter.com/fkM9mi2QIH

Nice free kick from Salah. Strikes it really well for his second goal of #AFCON2019 pic.twitter.com/fnm2fK95bM

Salah’s stunning effort tonight is his second of this summer’s competition, the attacker will be hoping to hit the back of the net frequently for the Pharaohs this summer as they aim for a AFCON triumph.