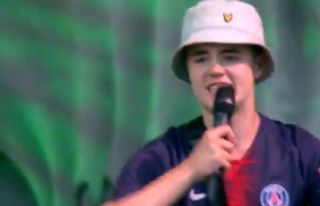 A fan at Glastonbury called Alex has gone viral with this incredible performance alongside Dave of a track called Thiago Silva.

Named after the Paris Saint-Germain defender, he’s now responded to Alex’s remarkable showing at Glastonbury and wants to meet him.

Watch above as Dave picks Alex out of the crowd to perform his song with him, as he’s wearing a PSG shirt with Thiago Silva’s name and number on it.

It was a memorable moment from this year’s festival, and now Alex has a very big fan in the form of Silva himself!

Me ajudem a encontrar o Alex!