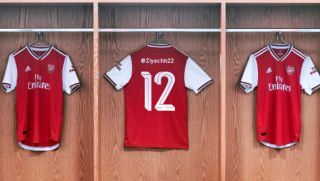 Adidas have caused a real stir on Twitter today that has loads of Arsenal fans convinced their club could be clinching the transfer of Hakim Ziyech this summer.

The Ajax attacking midfielder was a world class performer for the Eredivisie giants last season, helping them win the title in Holland and reach the semi-finals of the Champions League.

And now, Adidas have posted a picture of their new Arsenal strip with Ziyech’s name on the back…

@Ziyechh22 This is home. Welcome to the squad.
Now it’s time to seal the deal – order your new home shirt here: https://t.co/PYv2tn5ZN8#DareToCreate pic.twitter.com/unYUrBzTrp

However, there appears to be a perfectly reasonable explanation as it’s in response to someone with Ziyech in their Twitter username.

Many Gooners, though, still think it could be a deliberate clue about a move for the Morocco international…

Ziyech has signed for Arsenal??????

What is going on @Arsenal !? #Arsenal #AFC #adidas #Ziyech pic.twitter.com/U7vWhDAHGt

Its to help arsenal paying attention. Adidas want Ziyech at arsenal, as we can see.