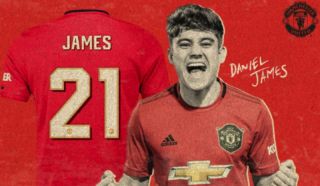 Manchester United’s new signing Daniel James has been confirmed as taking the number 21 shirt after recently completing his transfer from Swansea City.

Manchester Evening News writer Rich Fay has tweeted pictures of James 21 shirts on sale ahead of the new season, and some Red Devils supporters have made a connection with a previous signing whose squad number turned out to be significant.

You may remember a certain Robin van Persie joined Man Utd from Arsenal back in 2012 and took the number 20 shirt, with the Dutchman’s superb form that season resulting in the club winning their 20th league title.

They’re still waiting for their 21st, however, so could James taking the number 21 shirt mean he’s going to be the man to deliver it?

Probably not, as he’s surely not going to perform as well as Van Persie did, and will be part of a much inferior overall squad anyway, but don’t stop this lot from dreaming…

"I will wear #21 because I am here to win Manchester United's 21st title." pic.twitter.com/9E3jDcfWH1

Get us title number 21, please.@Daniel_James_97, small request from my side. https://t.co/xpfI8cprpM