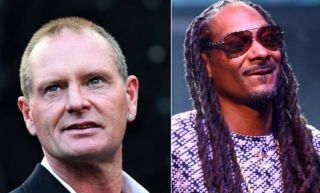 Former England star Paul Gascoigne is having some personal beef with rapper Snoop Dogg and has challenged him to a charity boxing match because, you know, 2019.

The Premier League legend is well known for having had his difficulties off the pitch throughout his playing career and after it, but generally seems in a better place these days.

Still, that didn’t stop Snoop Dogg taking a dig at 52-year-old on social media, comparing the effects of marijuana use to Gazza’s alcohol problems.

Gascoigne has now posted a few tweets mocking the musician, and has also been quoted by the Daily Mirror as telling Good Morning Britain he’d like to challenge him to a charity boxing match.

FFS I’m getting grief?I just got back from Spain doing4days of charity work&3days enjoying myself&I’m getting fucking snoop dog posting a picture from around 6to8yrs ago&in the press FFS 4 no reason well I ain’t finished yet @Shanewh1tfield&@SnoopDogg shane get him some work?xx

“Sometimes I expect it from the English press, but to come from Snoop Dog…” he said.

“I’m a fan of his as well, I cannot believe it. I tell you what I’ll do, I’ll do a charity boxing match with him, cannabis versus booze, bring it on!

“For him to do that is really bang out of order and I was upset at the time. I try to look at the funny side of it, but there wasn’t really much of a funny side to that to be fair.

“I thought, why me? I remember watching him ages ago and became a fan. He must do [know who I am]. I was shocked.”