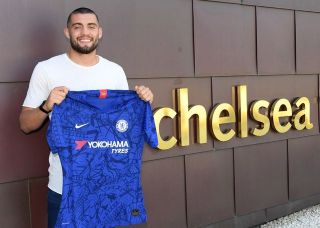 Chelsea have confirmed the signing of Mateo Kovacic from Real Madrid on a permanent basis, and their fans were delighted with the news.

As noted by BBC Sport, it is believed that the deal will cost the Blues a £40m fee as they are able to circumvent UEFA’s transfer ban given that the Croatian international was on loan with them last season.

It has been suggested that Arsenal may only have around £40m to spend in the summer transfer window in total, as per the Mirror, and so some Chelsea fans, as seen in the tweets below, couldn’t help but troll their rivals after the deal was confirmed on Monday.

Others called for Frank Lampard’s return to be announced as the Derby County boss is being heavily linked with being appointed Maurizio Sarri’s successor this summer, as per BBC Sport, while others lauded the move for Kovacic as he could prove to be a vital figure next season and beyond.

Although the former Inter and Real Madrid star didn’t have a decisive impact last year, he was a crucial presence in the squad to help them compete on multiple fronts.

With an inability to add further reinforcements this summer, it’s arguably a sensible decision from Chelsea to make his move a permanent one, and it seems as though many fans are delighted that the club have found a way to make a signing despite the ban.

In addition, they were particularly keen to make a point of the fact that they’re still making moves while the wait goes on for Arsenal and Spurs to strengthen.

What a Gargantuan club we are. The Pride of London.

Transfer ban and still signed a player before arsenal and spurs ?

? He left Madrid
And he left Milan
He signed for Chelsea
In a transfer ban ? pic.twitter.com/4OQ1IcIO62

Can’t really understand why people think this is such a bad signing to make, 25 years old, lots of experience already and had a few really strong performances throughout the season although not consistent enough, can also play different positions within the midfield.

4th best midfielder in the league after Kante, Jorginho, RLC. The stats say it all. What a bargain. pic.twitter.com/4ZpApWiH9A