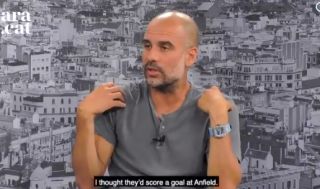 Manchester City manager Pep Guardiola has made a huge claim about Liverpool and how their Anfield stadium gives them a unique edge.

Speaking in the video clip below, the City boss makes it clear he believes there’s nothing else in world football quite like the atmosphere Reds fans can generate at their home ground.

"There's something about it that you will find in no other stadium in the world."

Guardiola knows this all too well with some of his hardest games as City manager coming at Anfield, including a 3-0 defeat in the Champions League quarter-final in 2017/18, when Jurgen Klopp’s side raced into a 3-0 first half lead.

It’s striking to hear one of the smartest tacticians in the world admit that the noise in these games simply makes it feel inevitable that LFC will score several goals quickly, and that their players almost appear bigger than the opposition.

Liverpool fans will absolutely love to hear this fascinating analysis from one of the all-time great coaches.