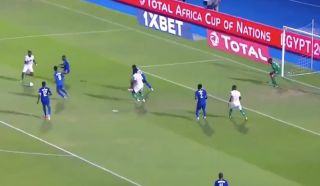 Arsenal have reportedly launched a £40m bid for Crystal Palace winger Wilfried Zaha, and he provided a reminder of why the Gunners are so desperate to sign him.

Coming off the back of an impressive Premier League campaign with the Eagles, the 26-year-old is currently on international duty this summer as he hopes to lead Ivory Coast to AFCON glory.

He certainly played his part on Monday night as he scored this brilliantly taken goal to help them to a 4-1 win over Namibia in their Group D clash, a result which secures their place in the last-16 of the tournament.

As per Sky Sports, Arsenal are said to have made a £40m bid to try and prise him away from Selhurst Park this summer, and while we await to see if they’re successful in their pursuit, Zaha will undoubtedly be avoiding a scenario in which he lets it distract him from the more immediate objectives.

Nevertheless, it’s a clinical finish from a top-class player and with this level of quality in mind, it’s no surprise that Arsenal are eager to prise him away to north London ahead of next season.