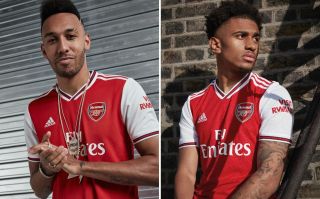 Adidas have come under fire for a social media gaffe yesterday that saw them inadvertently tweet out a number of offensive messages during Arsenal’s kit launch.

The Gunners have just switched from Puma to Adidas to design their shirts, and the German manufacturer have certainly started well with a classy home strip.

MORE: Zaha in, Aubameyang out: Dream potential Arsenal XI with five new signings if they can raise funds from player sales

However, they messed up an attempt to promote their shirts on Twitter, with some hugely offensive usernames coming up on the back of the kits.

According to the Guardian, fans were encouraged to tweet the promotional hash tag, which then automatically got them a customised image of their username on the Arsenal shirt.

Adidas have since released a statement saying they’ve turned this function off as a result of it being hijacked by a few idiots.

A spokesperson for Adidas is quoted by the Guardian as saying: “As part of our partnership launch with Arsenal we have been made aware of the abuse of a Twitter personalisation mechanic created to allow excited fans to get their name on the back of the new jersey.

“Due to a small minority creating offensive versions of this we have immediately turned off the functionality and the Twitter team will be investigating.”