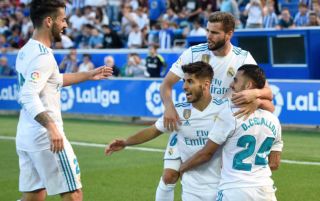 Arsenal and Tottenham both reportedly hold an interest in Real Madrid midfielder Dani Ceballos, as they’ve been tipped to rival AC Milan for his signature.

The 22-year-old was limited to 34 appearances for the Spanish giants last season in a bit-part role, and given his talent and the quality that he possesses, he will undoubtedly feel as though he’s ready for a more prominent role elsewhere if one isn’t forthcoming at the Bernabeu.

He seemingly won’t be short of options this summer as MilanNews report, via SportMediaset, that not only are Milan interested in signing the classy Spanish midfielder, but both Arsenal and Tottenham are also keen on the U21 international.

That will be a blow for the Italian giants, as with the report noting that the Premier League duo could try to sign Ceballos outright, they may be at risk of missing out due to an inability to compete with them financially.

As per Calciomercato, it has been suggested that Real Madrid won’t be allowing him to leave on the cheap this summer, as they value Ceballos at €50m.

In turn, whichever side is planning to wrap up a deal will have to splash out with Zinedine Zidane looking to balance his work this summer having already spent big money on the likes of Luka Jovic and Eden Hazard.

With Luka Modric, Toni Kroos, Casemiro and others likely to continue to push him down the pecking order, an exit from Madrid is surely the right move for Ceballos.

However, it remains to seen whether or not Milan, Arsenal or Spurs can reach an agreement with Real Madrid over a transfer fee first, as that will be the major obstacle standing in their way.