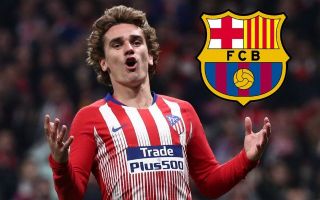 Barcelona will reportedly announce the completed transfer of Antoine Griezmann at the beginning of next week, according to latest speculation on the Atletico Madrid forward.

The France international has long been linked with a big move to Barcelona, and it looks like it might now be edging closer, according to Don Balon.

And in what could be interesting news for Manchester United, Don Balon claim Griezmann will take the number 7 shirt off Philippe Coutinho when he arrives at the Nou Camp.

Don Balon have recently been among the sources to link the Brazil international with Man Utd, while Paris Saint-Germain are also mentioned as suitors.

It would be fair to say Coutinho has not looked the same player that shone at Liverpool since joining Barca in a big-money transfer, and it makes sense that Griezmann could be about to replace him.

If the Atletico front-man really does take Coutinho’s shirt number, that surely points towards the former Reds attacker being sent on his way this summer.

Whether that’s to Old Trafford or not remains to be seen, but the Red Devils may well feel they’d have a strong chance of signing him after this potential development.