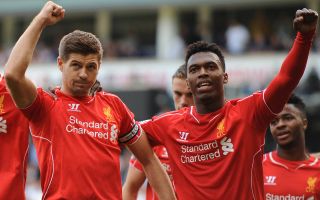 Plenty of clubs have been linked to Daniel Sturridge since BBC Sport announced he would be leaving Liverpool when his contract expired this summer. The Scottish Sun have since reported that Rangers are now the favourites to land the former England international.

Rangers closed the gap with Celtic to nine points last season, but still looked second best for much of the season. With Steven Gerrard in charge of Rangers it seems a logical link to sign his former teammate to give the team added fire power in their search for the Premiership title, but how would Sturridge fit in?

Rangers drew nine games last season and were hugely reliant on Alfredo Morelos for goals and inspiration – without him they dropped points against Dundee and St Johnstone which hurt their title bid. Morelos got sent off four times last season and his replacements were Kyle Lafferty, who managed just three league goals all season, and Jermaine Defoe, who turns 37 this year. Sturridge could add some class and goal-scoring ability to the forward line and help turn those draws into wins. He’s also shown in his career the ability to play as part of a front two or the lone striker with two wingers so Gerrard would have some flexibility in his approach.

As the saying goes ‘sometimes your best ability is your availability’. A lack of fitness and not being suited to Jurgen Klopp’s dynamic style of play limited Sturridge to only four league starts last season for Liverpool. We are now five years removed from his scintillating 2013/2014 season where he scored 21 league goals in a Liverpool team captained by Gerrard. If Gerrard could figure out how to get the best out of him, there’s no doubting Sturridge would be in the conversation as the best player in the Scottish Premiership next season.

Although Rangers wouldn’t need to pay a fee, The Mirror report that Sturridge was on £120k per week at Liverpool, which is surely far beyond what Rangers could pay. It may come down to Sturridge’s motivations at this stage in his career – does he want one final payday or the chance to win trophies and play in Europe? It’s obvious that a fit and motivated Sturridge would instantly improve Rangers. It just depends if Rangers get that version or the injured out-of-form player we have seen the past few seasons.

It would be an intriguing transfer for the league – which has been won by Celtic in each of the last eight years – and wouldn’t it be ironic if the work of Brendan Rodgers, to build Celtic towards the “Treble Treble” and 10 in a row, was ended by Gerrard and Sturridge who were key players for him at Liverpool?