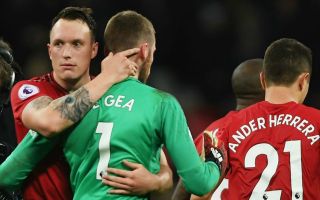 Manchester United are reportedly ready to take a big gamble and try to tie David de Gea down rather than selling him for a potential £70million transfer fee.

That’s the latest on the Red Devils goalkeeper’s situation from the Evening Standard, as they claim the club have got the player around the table for talks over a new deal after offering him significantly improved terms.

The report explains that United are ready to gamble on missing out on a transfer fee for De Gea, whose current contract expires in a year’s time.

This would make the Spain international a free agent, but the Standard explain that MUFC feel they’ve got good value out of him, having signed him for what now looks a bargain fee all the way back in 2011.

De Gea has certainly been an outstanding performer in his time at Old Trafford and it would be a big boost if they could get him to stay.

If not, however, it might be more worth the club’s while having him on board for another season rather than selling now and being forced to quickly sign a top class replacement.

Fans will hope United know what they’re doing, though in fairness there’s not always been a lot of evidence of that with some extremely suspect work in the transfer market in recent times.