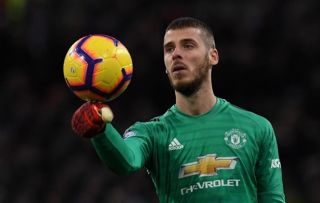 According to the Daily Mail, United are set to table a five-year deal worth £350,000 per-week in order to secure De Gea’s long-term future at the club. The deal would see De Gea increase his current £240,000 per-week deal by £110,000 and earn a staggering £91m throughout its duration.

The proposed contract will be music to the ears of United fans as De Gaa enters the final year of his current contract. As it stands, De Gea would be allowed to speak to clubs in January about the possibility of a free transfer next summer.

De Gea is no stranger to the subject of transfer talk, having been heavily linked with Real Madrid for a number of years before Los Blancos opted for Thibault Courtois last summer.

But with De Gea’s ability surpassing that of United’s current position, suitors are never far away. The Daily Mail goes on to list Juventus and Paris Saint-Germain as two other clubs who are keeping a close eye on him.

PSG recently parted company with Gianluigi Buffon after the expiration of his one-year contract, whilst Juventus are on the verge of bringing Buffon back to Turin according to Sky Italia’s Fabrizio Romano.

Despite this, Juve may still be keeping tabs on developments and may look to snatch another Premier League star on a free transfer after swiping long-term Arsenal servant Aaron Ramsey.